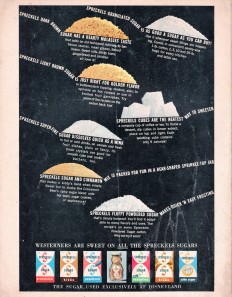 This Winter 1961-62 issue of Vacationland features a cover shot of the Disneyland-Alweg Monorail, as seen from Harbor Boulevard.

The Walt-Disney-Productions-published magazine, conceived by Disney Legend Marty Sklar (this issue is co-edited by Sklar), was a glorified advertisement for Disneyland, as well as other Southern-California tourist attractions. Local motel and hotel rooms were stocked with the complimentary publication, which featured articles on different aspects of Disneyland on a quarterly basis, and was supplemented with advertisements and brief articles on other tourist destinations both locally and beyond. Beginning in 1957, and originally titled Disneyland Holiday, the magazine ran for several decades and even spawned a Walt Disney World version.

Highlights of this twenty-one-page edition (Vol. V, No. 4) include articles on the park’s monorail system, the plant-life around the park, the Matterhorn Bobsleds attraction, as well as a two-page, full-color photo-spread of scenes from around the Magic Kingdom.