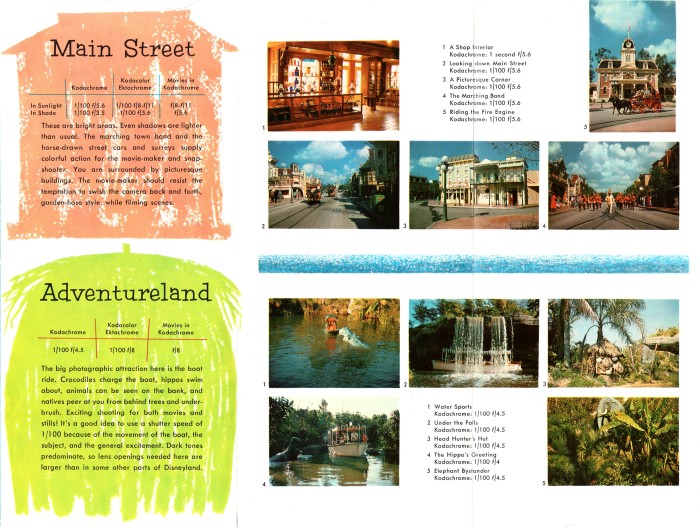 This 1956 brochure, titled “Kodak Camera Tour of Disneyland,” includes photography tips for visitors, tailored to each of the park’s five lands.

From the park’s opening, Kodak served as the official film and camera partner of Disneyland, a relationship that lasted until 2012. Through their sponsorship of various brochures, shops and kiosks, and of course the many “Picture Spots” found across the park, their presence was a mainstay in Disneyland for nearly sixty years.

The 1956 iteration of the “Camera Tour” brochure features cartoon representations of each of the park’s five lands on its front cover, along with the 1956 Walt Disney Productions copyright. A separate section dedicated to each land can be found inside, complete with a brief overview of photo opportunities, sample shots from within the land, and exposure details for use with either Kodachrome or Kodacolor Ektachromo film, as well as for movies shot on Kodachrome. The remainder of the brochure includes general exposure information based upon available light, with a panel each discussing shooting options in daytime and nighttime environments, respectively. The back panel shows a printing date of 7-56.

These are bright areas. Even shadows are lighter than usual. The marching town band and the horse-drawn street cars and surreys supply colorful action for the movie-maker and snap-shooter. You are surrounded by picturesque buildings. The movie-maker should resist the temptation to swish the camera back and forth, garden-hose style, while filming scenes.

The big photographic attraction here is the boat ride. Crocodiles charge the boat, hippos swim about, animals can be seen on the bank, and natives peer at you from behind trees and underbrush. Exciting shooting for both movies and stills! It’s a good idea to use a shutter speed of 1/100 because of the movement of the boat, the subject, and the general excitement. Dark tones predominate, so lens openings needed here are larger than in some other parts of Disneyland

Lots of action in this Wild West. With a handy camera you can get the drop on many colorful frontier characters. You can explore the country by stage coach, buckboard, Canastoga [sic] wagon, pack mule, or on the spectacular Mine Ride. River rides on the paddlewheel steamer, Mark Twain, and on Mike Fink’s keel boat provide good vantage points for picture taking. Go ashore on Tom Sawyer’s Island for a roll full of unusual scenes.

This is a very bright area because of the open sky and the brightness of the buildings and pavements. Speedboats, miniature cars, the Skyways, and Astro-Jet rides provide plenty of action. The buildings in this area house interesting displays which can be photographed most easily by using flashlamps. Moving crowds make time exposures troublesome. Camera settings for flash pictures can be figured from the tables on the back of Kodak flasholders, or from the flash guide numbers on the lamp carton.

The castle is a favorite picture point. The towers, moat, and draw-bridge make good pictures by themselves or as backdrops to pictures of the family. In the castle court there are picture-worthy rides on the Carousel, in the tea cups, and through the air on Dumbo. From the cars of the Casey Jr. Circus Train you can photograph miniature scenes recreated from childhood stories. Mr. Toad’s Wild Ride, Snow White, and Peter Pan are dark rides; snapshots, flash exposures, or movies are not practical.

If you’re an old hand at judging exposure in the Southwest, you’ll probably do all right at Disneyland. If you’re from the northern half of the U.S., the lighting conditions of Disneyland may fool you. Scenes are often brighter than you think they are. Wide expanses of sky overhead and light-colored surroundings make the difference. Scene brightness here calls for a lens opening about a half-stop smaller than usual for pictures in color.

If it is a Hazy Sunny Day, increase your lens opening a half stop larger than that shown for Bright Sun.

If it is Cloudy Bright (no sun), increase your lens opening one stop larger than for Bright Sun.

When Scenes Include Important Subjects Closeup, increase the lens opening a half stop.

If you need any kind of photographic help, look up the Kodak representatives at the Kodak Store at 210 Main Street (middle of block). Supplies also can be obtained there or at the many shops and stands throughout Disneyland.

At night the snapshooter has the advantage over the movie-maker. He can continue taking color pictures by using time exposure or flash lamps. The light is not bright enough to get satisfactory movies in color—even at half speed of 8 frames per second. BUT, the movie-maker can shift to that speedy film, Cine-Kodak Tri-X, and get excellent movies in black and white. Only one exposure recommendation is given above, although illumination levels vary throughout nighttime Disneyland. The exposures are based on Main Street illumination. Some scenes are going to need larger lens openings or time.

This original park brochure, printed at the start of Disneyland’s second year of operation, makes for a fascinating early collectible, featuring twenty-eight full-color images of the park’s many photogenic offerings.