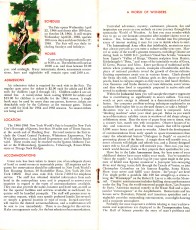 Opening on April 22, 1964, the fair ran for two consecutive six-month seasons in both ’64 and ’65 and was home to nearly one-hundred fifty pavilions showcasing cultural and technological attractions and exhibits from around the world. Four of the most popular pavilions were designed by Walt Disney and his WED Enterprises staff: General Electric Progressland, Pepsi-Cola Presents ‘It’s a Small World’—a Salute to UNICEF and the World’s Children, the State of Illinois’ ‘Great Moments with Mr. Lincoln, and Ford’s Magic Skyway. The fairgrounds, which covered Flushing Meadows Park in Queens, New York, hosted more than fifty-one billion visitors over its run and the fair would be looked back upon as a highlight of American optimism and ingenuity on the eve of the counter-culture revolution of the mid-to-late 60s.

The brochure, which is fronted by a rendering of the fair’s Transportation and Travel Pavilion, provides the following introduction to the event, as well as basic information for visitors and brief descriptions of the fairgrounds’ five principal areas: the International Area, Industrial Area (location of Carousel of Progress and It’s a Small World), Lake Amusement Area, Transportation Area (Magic Skyway) and Federal and States Area (Great Moments with Mr. Lincoln).

The basic purpose of the Fair is to help achieve “Peace through Understanding;” that is, to assist in educating the peoples of the world as to the interdependence of nations and the need for universal and lasting peace. To that end, the Fair is dedicated to showing man’s achievements on a shrinking globe in an expanding universe; his inventions, discoveries, arts, skills and aspirations; and also to the presentation of wholesome entertainment.

The Fair will coincide with the celebration of the 300th anniversary of the founding of the City of New York, the 15th anniversary of New York having become the home of the United Nations, the opening of Lincoln Center for the Performing Arts, the realization of New York Metropolitan Arterial highway program, and the completion of Flushing Meadow Park with a legacy of permanent recreational facilities useful long after the Fair has closed.

In addition, the brochure contains a three-panel foldout map of turnpikes and parkways into the city from surrounding states, as well as a more detailed map of the fairgrounds themselves on the reverse side. Longstanding tourist destinations of New York City and the larger Northeast are also briefed in the final four panels of the brochure.

This original brochure map offers an informative look at the 1964-65 New York World’s Fair, an event which effectively propelled Walt Disney’s already-shining star into the stratosphere.