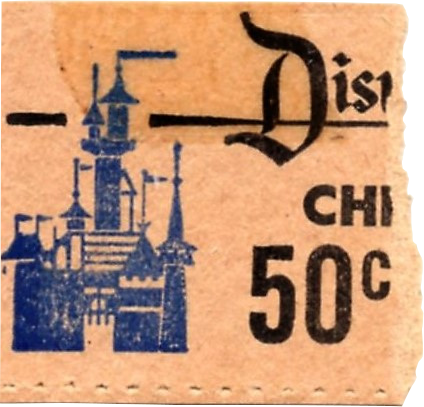 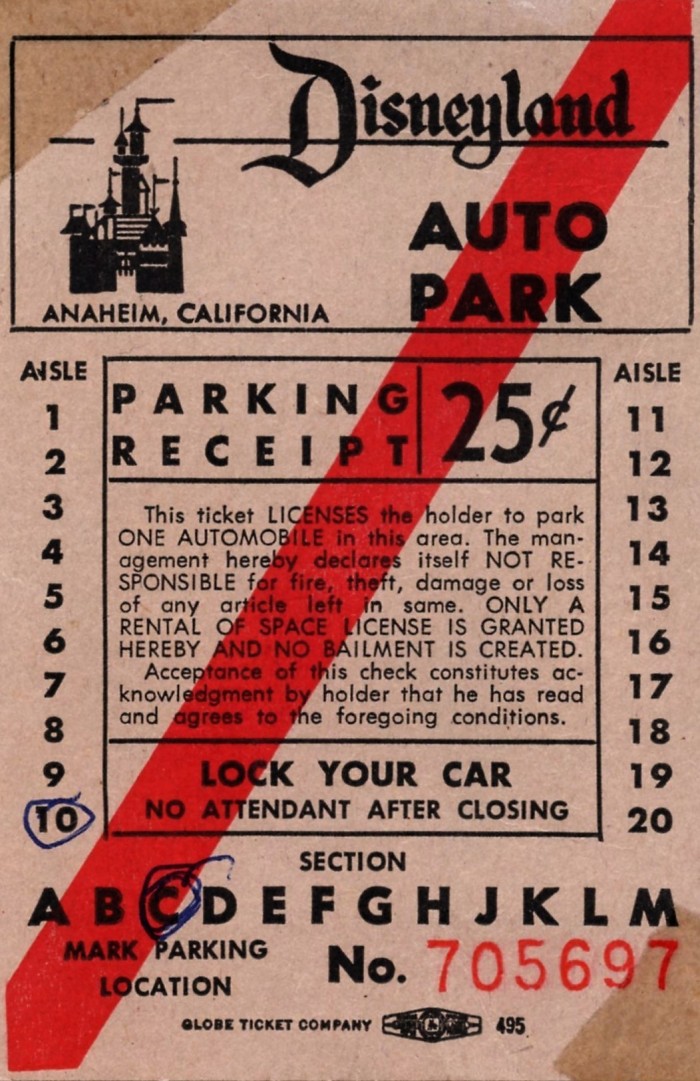 This collection of original 1955 Disneyland tickets dates to the first few weeks of the park’s operation and features four general admission tickets (three adult and one child), a total of seven individual attraction tickets, and a parking receipt ticket from the Disneyland Auto Park.

The original purchasers of the tickets, a family who visited the park on August 6, 1955, only the third full weekend of park operations, paid a dollar each for the general admission adult tickets and fifty cents for the child’s ticket. These tickets, sold at the park entrance, came in a variety of colors, these particular examples being of the pink (adult) and white (child) variety. Roy O. Disney’s famed 000001-ticket, the first general admission ticket ever distributed (now housed in the Disney Archives), was yellow in color.

Before the advent of ticket books, which would be introduced for the first time in October of that year, purchasing individual attraction tickets was a guest’s only option for experiencing the park’s offerings. These tickets ranged in price from ten cents for the most basic attractions (Main Street Vehicles and various walk-through attractions)—of which there are four tickets in the collection—all the way up to thirty-five cents for a “premiere” attraction like Snow White’s Scary Adventures—of which there are three ticket examples. The ten-cent attraction tickets feature serial numbers 013473 – 013476, while the Snow White tickets are likewise numbered sequentially 045077 – 045079.

The Disneyland Auto Park ticket is numbered 705697 and is gray in color. In addition, the purchaser marked on the ticket in black ink the location of the family’s parking spot: Section C, Aisle 10.

All tickets were produced by the Globe Ticket Company, Los Angeles, Disney’s long-time ticket vendor and manufacturers of the famed, lettered ticket books that would later be utilized for several decades.

Unfortunately, all tickets were torn upon receipt, either at the park’s main entrance, or at the individual attractions. The only examples that have survived in-tact are those tickets that were never actually used, such as Roy O. Disney’s famed Ticket #1.

This set of original Disneyland tickets, verified to have been purchased within the park’s very first month of operation, are extremely rare and represent a highly-desirable collectible from one of the biggest moments in Disney and theme-park history.