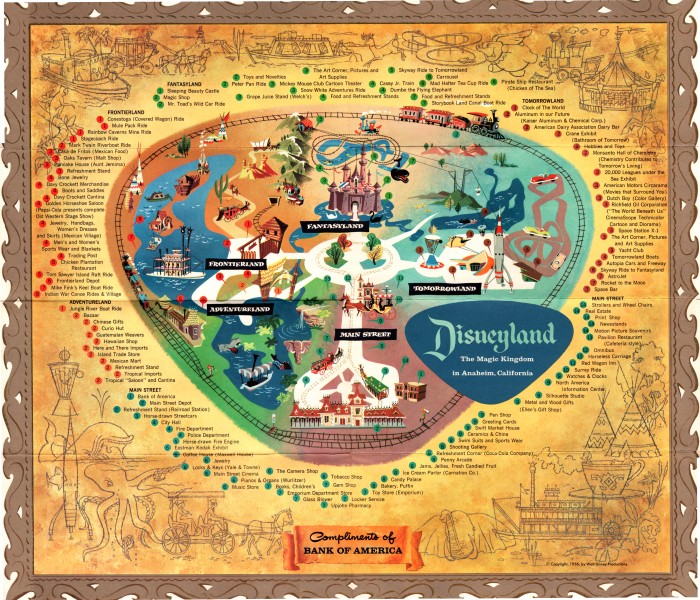 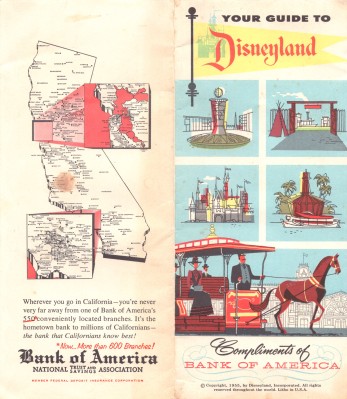 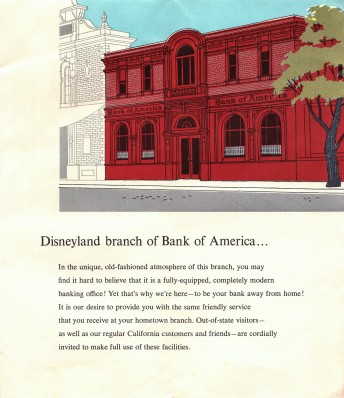 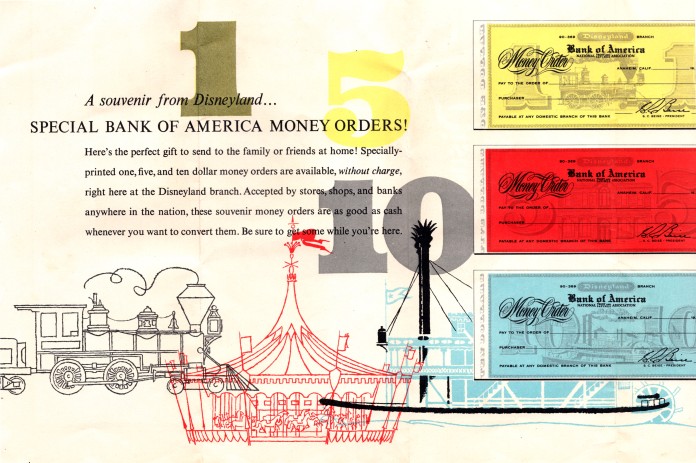 This 1956 “Your Guide to Disneyland” brochure map, sponsored by Bank of America, was distributed to guests in the park’s second season of operation. It is slightly larger than the original 1955 iteration and features a more elaborate, colorized, cartoon map of the park and its increased offerings from the previous year.

The relationship between Disney and Bank of America dates back to the release of Snow White and the Seven Dwarfs, a film they helped to finance. They would provide backing for many of the studio’s early animated films, as well as play a large role in funding the construction of Disneyland, even maintaining a fully-functional branch on Main Street, U.S.A., for several decades. This complimentary brochure map was made available to guests who utilized the branch’s services or just stopped in for a look. In fact, two of the sixteen panels are dedicated to the facility that was built to coincide with the turn-of-the-century style of Main Street. Coupled with a rendering of the branch is the following introductory text:

Disneyland branch of Bank of America…

In the unique, old-fashioned atmosphere of this branch, you may find it hard to believe that it is a fully-equipped, completely modern banking office! Yet that’s why we’re here—to be your bank away from home! It is our desire to provide you with the same friendly service that you receive at your hometown branch. Out-of-state visitors—as well as our regular California customers and friends—are cordially invited to make full use of these facilities.

Another four panels of the brochure describe the custom money orders, made specially for the Disneyland branch, and available in one, five, or ten dollar-amounts, that guests could purchase as souvenirs. All three money orders are pictured, accompanied by a brief explanation:

A souvenir from Disneyland…

Here’s the perfect gift to send to the family or friends at home! Specially-printed one, five, and ten dollar money orders are available, without charge, right here at the Disneyland branch. Accepted by stores, shops, and banks anywhere in the nation, these souvenir money orders are as good as cash whenever you want to convert them. Be sure to get some while you’re here.

The brochure unfolds into an eight-panel map of the park, divided into its five lands: Main Street, U.S.A., Frontierland, Fantasyland, Adventureland, and Tomorrowland. This version features the 1956 Walt Disney Productions copyright at the bottom of the map (while retaining the 1955 copyright on the brochure’s front panel). Below can be found the park’s 1956 offerings, grouped for the most part by general location, rather than in the form of an itemized list as would be standard in later maps.

The back panel of the brochure includes an advertisement for the sponsor, with a quick blurb about the more than six hundred Bank of America branch locations nationwide, while the front features the “Your Guide to Disneyland” heading, sponsorship (“Compliments of Bank of America”) and original copyright (“1955, by Disneyland, Incorporated”) information, as well as simple drawings representing each of the park’s five lands.

This early Disneyland brochure map features one of the most popular early-park maps for today’s collector. While the 1955 version is sought after for its connection to the park’s opening, the 1956 has become desirable for the Walt Disney Productions map featured in its interior.