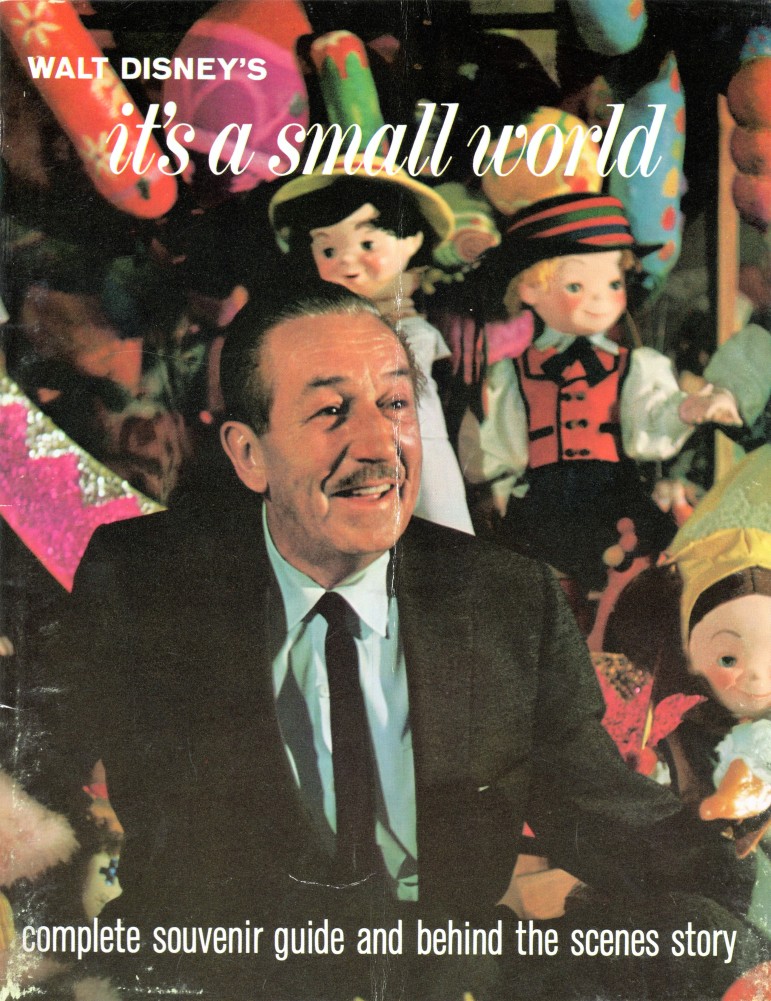 This souvenir guidebook, officially titled “Walt Disney’s It’s a Small World: Complete Souvenir Guidebook and Behind the Scenes Story,” was available for purchase to visitors of the 1964-65 New York World’s Fair.

The cover features a smiling Walt Disney pictured with a number of the stylized “dolls” that inhabit the famous attraction. The reverse side includes the 1964 Walt Disney Productions copyright and an example of the well-known artwork used to promote the attraction at both the fair and later Disneyland and subsequent parks. Accompanying is the following introduction from Disney himself:

“To all who come to this happy place…welcome.”

These words, engraved on its dedication plaque, symbolize the warm and friendly spirit of Disneyland, our Magic Kingdom in Anaheim, California.

Now we have created another kind of “magic kingdom,” with its world premiere at the New York World’s Fair. In theme, and in its festive spirit, we have tried to make this new “land” the happiest of places…”a magic kingdom of all the world’s children.”

We call this adventure “It’s a Small World.” All of us who participated in its creation hope that your ride through our Small World is a memorable experience for you and your family.

“To all who come to this happy place…welcome.”

The twenty-four-page booklet goes on to take the reader on a tour of the ride itself, complete with a number of color photographs from inside the attraction. The center of the book is reserved for a two-page spread of a cartoon-style interpretation of the track layout with a colorful collection of the “children of the world” dressed in their respective countries’ traditional garb. The remainder of the book is dedicated to a behind-the-scenes look at the making of the attraction, again including photographs of the ride’s development, as well as those who had a hand in bringing it to life. The final pages of the book are dedicated to the attraction’s enduring theme song, written by the Sherman Brothers, while the back cover sports advertising copy from the ride’s promotion, as well as an artistic rendering of the “Tower of the Four Winds”—the attraction’s famous marquee, designed by Imagineer and Disney Legend Rolly Crump.

The attraction which was created by Walt Disney and WED Enterprises was commissioned by Pepsi-Cola and UNICEF, co-sponsors of the fair pavilion which housed the ride. “It’s a Small World” would be one of the fair’s greatest successes, thanks to the talents of such individuals as Mary Blair, whose touch of whimsy and unique color-stylings gave the attraction its highly-memorable aesthetic. Rolly Crump’s additional design work supplemented Blair’s, while staying true to the style she’d established. He also designed the memorable Tower of the Four Winds marquee that fronted the attraction. Well-known Disney sculptor Blaine Gibson designed the famed Audio-Animatronic dolls that populate the attraction, while Alice Davis handled costume design. Her husband Marc—master-animator-turned-Imagineer—provided much of the character and scene design. And, of course, Richard and Robert Sherman penned the immortal title track, now the most performed and widely-translated song in the history of the world.

This original souvenir guidebook from the debut of one of the most popular themed attractions of all time at the 1964 New York World’s Fair, celebrates not only the “Happiest Cruise That Ever Sailed,” but also one of Walt’s last major triumphs before his passing a couple years later.