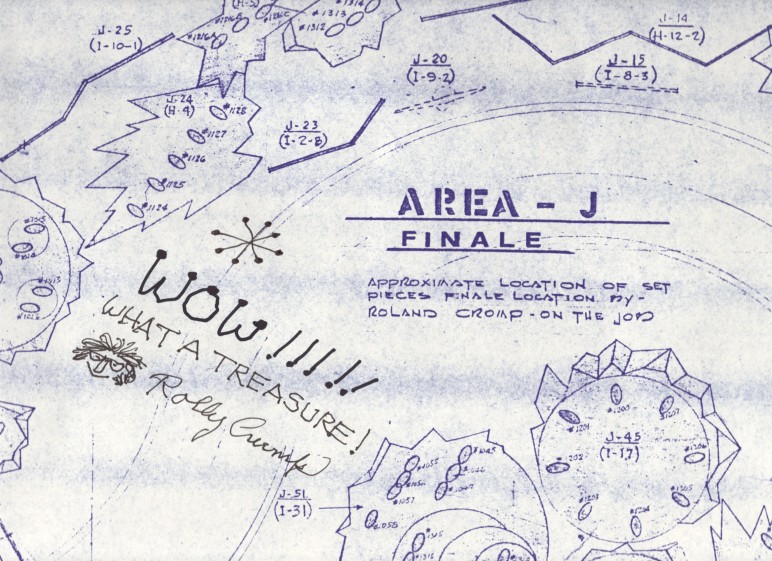 This original set of two blueprints, from WED Enterprises, dates back to the relocation of the It’s a Small World attraction from the New York World’s Fair to Disneyland in early 1966. One of the blueprints has been inscribed and signed by Disney Legend and attraction-designer, Rolly Crump.

Though many within the ranks of WED Enterprises thought Walt Disney crazy for undertaking yet another World’s Fair attraction (his fifth)—and a simple children’s boat ride at that—less than a year before the event’s opening, It’s a Small World ended up being the runaway success of the fair. At the fair’s conclusion, the attraction was packed up and shipped to Disneyland for relocation to its permanent home in Fantasyland.

The first of the blueprints, labeled Sheet Number D-1.2, covers the construction and installation of the “North Pole” and “Finale” areas (labeled Areas A and J) of the attraction. The “North Pole” area was new to the Disneyland version, designed by famed Imagineer Rolly Crump upon the attraction’s return to California. The blueprint provides an overhead layout of his various design pieces. Among the facades and platforms are also listed a “Cloud of Snowflakes,” “Clock,” “Totem Pole,” “Toy Bear,” “Toy Fish,” “North Pole Animated,” “Toy Seals,” “Eskimo,” “Toy Bear & Kayak,” “Whale Set Animated,” “Toy Walrus,” and “Eskimo.” The plans also provide installation details for the memorable last scene in which the children of the world sing and dance together, a picture of peace and unity, per the attraction’s original underlying theme that was underwritten in part by UNICEF. Portions of both the entrance area and exit/hold area can be seen, as well. The document is covered in handwritten instructions for individual set pieces: information on numbering, height, elevation, and placement. Twice, designer Rolly Crump is referenced on the blueprint.

AREA – J HOLD: AREA TO BE DESIGNED AND/OR DIRECTED BY ROLAND CRUMP

In addition, the Disney Legend, who reviewed this particular blueprint in 2017—fifty-one years after its use in the attraction’s installation in Disneyland—has also added an inscription and signature in black ink, complete with a star-symbol and self-portrait sketch.

Crump, a former animator who worked on such classics as Peter Pan, Lady and the Tramp, and Sleeping Beauty, played a key role in the attraction’s initial design—both the interior and exterior—creating the iconic Tower of the Four Winds marquee, which fronted the attraction during its run at the 1964-65 New York World’s Fair. The popular structure soon became a symbol for not only the attraction, but the fair itself. When the tower was unable to make the cross-country trip back to California at fair’s end, Walt once again tapped Crump to design the over-sized, animated clock, which stands to this day outside the Disneyland attraction. In addition to his work on It’s a Small World and the other World’s Fair attractions, he also contributed heavily to the design of the Adventureland Bazaar, the Enchanted Tiki Room, and of course, the ever-popular Haunted Mansion. He went on to help oversee various projects at the Walt Disney World Resort in Florida and was named a Disney Legend in 2004, after a memorable career that spanned parts of five decades.

Additional details about the blueprint and project itself can be found in the document’s sidebar. As noted, this particular blueprint was referenced and utilized three more times in the late-70s and early-80s for minor construction projects.

Project designer, Chuck Myall, was one of Walt’s original Imagineers and instrumental in the original design of Disneyland, as was Disney Legend, Richard Irvine, who also signed off on the blueprint. Irvine headed the design for all Disneyland attractions from its opening through his retirement in 1973. In addition, he oversaw the development of all World’s Fair attractions, including It’s a Small World, and went on to play a crucial role in planning Walt’s Florida Project as Executive Vice President and Chief Operations Officer for WED Enterprises. In fact, both Myall and Irvine share a Main Street window with Walt himself. Additionally, Myall was one of eight Imagineers to receive an original Haunted Mansion tombstone tribute, and Irvine was honored in the christening of one of the Walt Disney World Magic Kingdom ferries as the Richard F. Irvine.

Also mentioned is project engineer, John Wise, who designed the support structures for many of the original buildings in Disneyland, as a member of the consulting firm, Wheeler & Gray. Two years after the park’s opening, he was named the park’s chief engineer. In 1965, Wise joined WED Enterprises and worked his way to Vice President of Engineering for the company, where he played a key role in the engineering design and planning of the Walt Disney World Resort in Florida. He is also honored with a Main Street window in Disneyland.

George Windrum, who checked over the blueprint, headed the Show Set Design unit for WED Enterprises, helping to map out the interior sets of many classic attractions.

The second blueprint, labeled Sheet Number D-1.20, features specifications for the construction and installation of seventy-one individual flower set-pieces within both the “North Pole” and “Scandinavia” sections (labeled as Areas A and B) of It’s a Small World.

This blueprint was used in the assemblage of the attraction and dates to the first weeks of January 1966. A total of six different design-styles of flowers can be seen (lettered A-E, plus the C1-C25 installations), as well as information regarding the placement, coloring, height, and stem-style of each. Additional details are as follows:

Other individuals who greatly contributed to the success of It’s a Small World include Mary Blair, whose touch of whimsy and unique color-stylings gave the attraction its highly-memorable aesthetic. Well-known Disney sculptor Blaine Gibson designed the famed Audio-Animatronic dolls that populate the attraction, while Alice Davis handled costume design. Her husband Marc—master-animator-turned-Imagineer—provided much of the character and scene design. And, of course, Richard and Robert Sherman, who penned the immortal theme, now the most performed and widely-translated song ever, have as much claim as anybody to the attraction’s enduring popularity.

These extremely rare original blueprints, outlining the technical specifications of one of the most popular theme-park attractions in history—hand-signed and inscribed by one of the key figures in its development and design—represent one-of-a-kind collectibles that pay tribute to one of Walt Disney’s greatest successes, and its historic run, on the road at the World’s Fair, and back home in his beloved Disneyland.