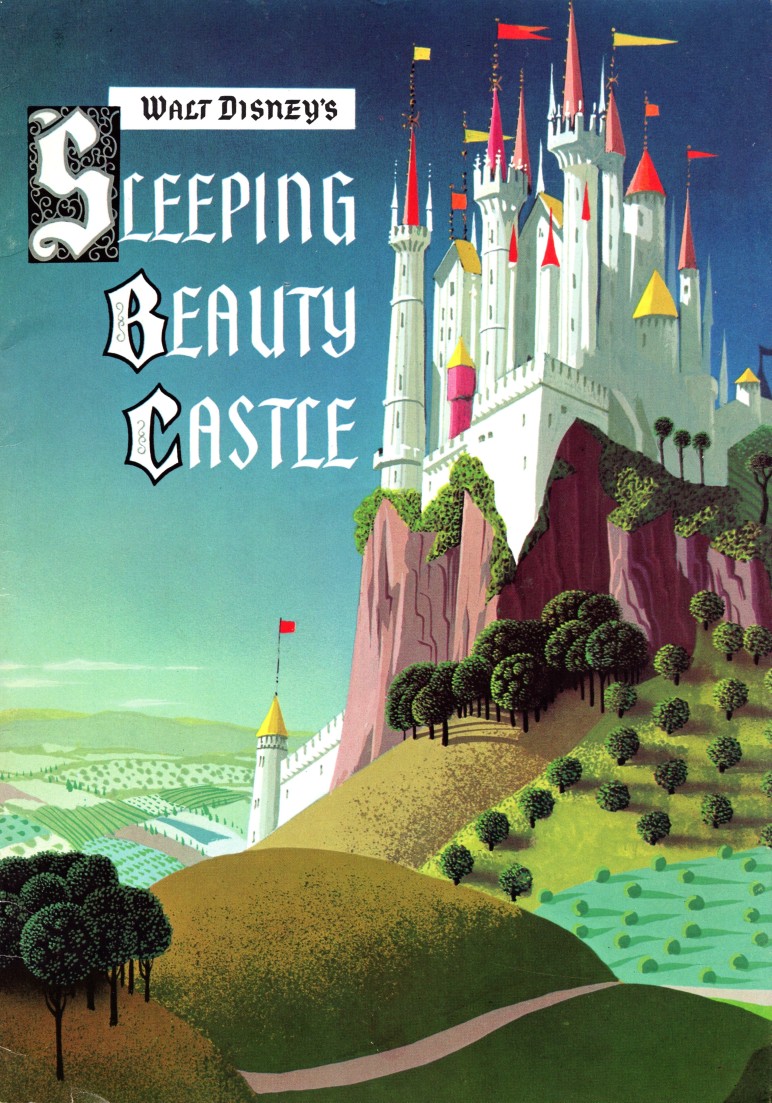 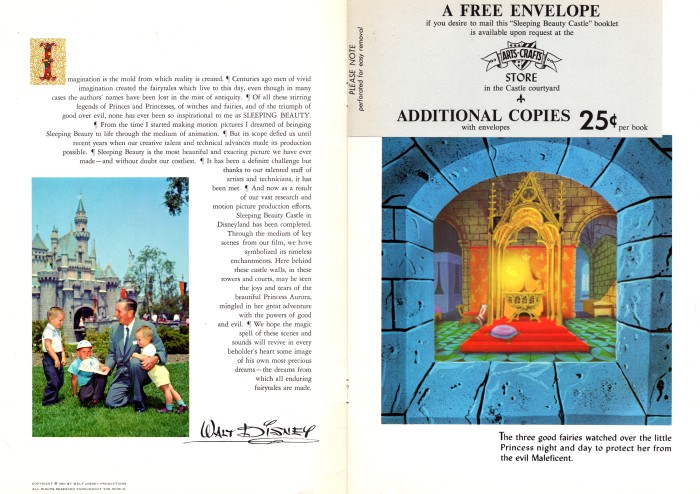 This 1957 souvenir booklet from Disneyland, meant as an accompaniment to the Sleeping Beauty Castle Walkthrough attraction, was available to guests for purchase in Fantasyland. This particular copy has been signed and personalized on the four-page fold-out center by Sleeping Beauty herself, Mary Costa.

Sleeping Beauty Castle, the original Disney castle, was not originally intended to house an attraction. The unused space, apparently filled with feral cats when Walt toured the structure during the conceptual stages of the walkthrough attraction, was soon put to good use providing an additional guest experience within the walls of the park’s iconic landmark, as well as promoting the studio’s upcoming animated feature. The attraction opened April 29, 1957, and featured a multi-level walking tour of several dioramas based on key scenes from the as-yet-unfinished film (the film wouldn’t be released until January 29, 1959). The dioramas were painted by Eyvind Earle, the artist and production designer responsible for the film’s unique and highly-acclaimed medieval style. In 1977, the dioramas would be redone in the style of the park’s popular Main-Street window displays, but would return to the original versions—albeit with enhanced technology—in 2008, when the attraction reopened after a seven-year hiatus.

The souvenir booklet meant to accompany the walkthrough provides full-color illustrations and captions based on the original dioramas. The front and back covers provide an example of the film’s departure from standard Disney animation, under Earle’s artistic influence. The opening page contains an introduction to both the attraction, as well as the upcoming film, from Walt Disney himself:

Imagination is the mold from which reality is created.

Centuries ago men of vivid imagination created the fairytales which live to this day, even though in many cases the authors’ names have been lost in the mist of antiquity.

Of all these stirring legends of Princes and Princesses, of witches and fairies, and of the triumph of good over evil, none has ever been so inspirational to me as SLEEPING BEAUTY.

From the time I started making motion pictures I dreamed of bringing Sleeping Beauty to life through the medium of animation.

But its scope defied us until recent years when our creative talent and technical advances made its production possible.

Sleeping Beauty is the most beautiful and exacting picture we have ever made—and without doubt our costliest.

It has been a definite challenge but thanks to our talented staff of artists and technicians, it has been met.

And now as a result of our vast research and motion picture production efforts, Sleeping Beauty Castle in Disneyland has been completed. Through the medium of key scenes from our film, we have symbolized its timeless enchantments. Here behind these castle walls, in these towers and courts, may be seen the joys and tears of the beautiful Princess Aurora, mingled in her great adventure with the powers of good and evil.

We hope the magic spell of these scenes and sounds will revive in every beholder’s heart some image of his own most precious dreams—the dreams from which all enduring fairytales are made.

The final page of the booklet goes on to provide further details of the film’s production and includes drawings of several of the new characters. Commentary on the animation featured on the fold-out section of the guide reads as follows:

The center fold-out page of this booklet is an example of the dramatic artistry created for our screen version of “Sleeping Beauty.” This is a reproduction of one of the several thousands of individual pieces of art required to bring this timeless story to the screen.

Here you see the lovely Princess Aurora in her forest hideaway where she lived as Briar Rose. Here, too, you see her valiant prince and his famous charger, Samson, and are introduced to some of the Princess’ many forest friends. All the well known characters of this romantic legend, and many new ones, have been painstakingly developed so that each may take its place in Disney’s gallery of cartoon greats. Each has been given a personality, combining voice, color, action and appearance to either enchant or awe the beholder.

“Sleeping Beauty” is dedicated to the young and the young in heart—to all who believe in fairytales—and who would share with us the dreams and memories of youth.

This copy of the guide is extremely unique in the fact that it’s been hand-signed by Mary Costa, the singing and speaking voice of Princess Aurora. Her inscription is inspired by the film’s famous song, “Once Upon a Dream,” as sung by both Costa and Bill Shirley (Prince Phillip) during the memorable forest sequence, depicted on the center fold-out:

Costa, who was born and raised in Knoxville, Tennessee, studied at the Los Angeles Conservatory of Music and quickly became an accomplished singer and actress. Costa’s performance at a 1952 dinner hosted by her alma mater, was heard by Walter Schumann, who at the time was slated to compose the score for the animated feature, which was then in the very early stages of production. Schumann approached her and set up an audition, after which Walt Disney personally contacted Costa to inform her the lead role was hers. The film would mark one of the most memorable performances ever by a “Disney Princess,” and the last in fact for three decades until 1989’s The Little Mermaid. Mary Costa went on to enjoy a successful career on both stage and screen, acting in Hollywood films, performing in operatic roles on stages across the world, and appearing on various television programs with celebrities the likes of Frank Sinatra, Sammy Davis Jr., Bing Crosby, Dean Martin, and Jerry Lewis. In 1963, she was asked by First Lady Jackie Kennedy to sing at a memorial service for the late President John F. Kennedy. After several decades in show business, Mary Costa retired at the age of seventy, having been named a Disney Legend the year prior.

This souvenir booklet, made exceptionally unique by the added personal touch of the real-life Sleeping Beauty, is a wonderful representation of not only the first years of Walt’s beloved Disneyland, but the classic film that he’d dreamed of making since his earliest days in the business.