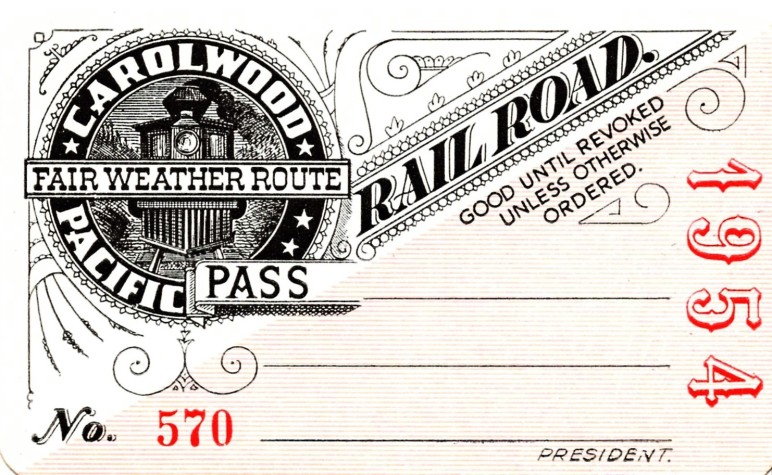 This 1954 souvenir pass, offering its holder a ride on Walt Disney’s personal, miniature railroad, the Carolwood Pacific, was printed by the Chief Engineer himself for use with the backyard attraction located at his Holmby Hills estate.

Shortly after moving to 355 N. Carolwood Drive, in the Holmby Hills neighborhood of Los Angeles, Disney began construction on a backyard railroad. Having been encouraged in his model-train hobby by studio animators Ward Kimball and Ollie Johnston, who boasted backyard railroads of their own, Walt received permission from wife Lillian to lay over 2,600 feet of track—complete with turns, crossings, overpasses, bridge, trestle, slopes and berm, as well as a 90-foot tunnel to leave Lillian’s flower beds undisturbed.

The 1:8-scale steam locomotive which ran the tracks, dubbed Lilly Belle in honor of his wife, was built primarily by studio employee Roger Broggie (with Disney assisting on some of the cosmetic features) and modeled after the Central Pacific No. 173, an historic locomotive from the early days of the transcontinental railroad. Both the original initials and numbering of the engine—CPRR, No. 173—remained intact on Disney’s version, since his chosen Carolwood moniker also fit the acronym.

Walt also had a barn constructed to house the railroad’s controls. The structure, along with various pieces of the railroad, would later be relocated as a stand-alone exhibit to the Los Angeles Live Steamers Railroad Museum in nearby Griffith Park. The No. 2 locomotive at Walt Disney World’s Magic Kingdom is named after Walt’s Lilly Belle engine, while the No. 3—the Roger E. Broggie—honors its creator.

While in use, the railroad became something of an attraction for family members, friends, and other visitors eager to take a ride on—and even guest-engineer—the miniature train. The Lilly Belle ran the “Fair Weather Route” from 1950-1953, until a minor incident in which a guest engineer accidentally derailed the train, causing a young girl to receive light burns from the steam, prompted Walt to shut down the operation indefinitely. His attentions were quickly consumed, however, by his Disneyland project, and the much larger railway that would one day encircle the park.

Prior to the accident, Walt had created souvenir railroad passes to serve as invitations and mementos for visitors. The Carolwood Pacific’s premature closure meant that the 1954 and 1955 versions, printed in advance through Retlaw Enterprises (Walt’s personal company, which oversaw specific projects for the studio and Disneyland, and housed the “Imagineering” division), were never issued and thus remained in the Retlaw offices until after Disney’s death.

The pass itself features a Carolwood Pacific Railroad logo, as well as the date of issue (1954) and unique numbering (No. 570). It also includes blank lines, on which Walt would have inscribed the guest’s name or a personalized invitation, as well as his own signature as “President” of the railroad, had the pass been used.

This very unique souvenir pass from Walt’s own backyard railroad represents the first themed attraction ever undertaken by Disney. As the forerunner of Disneyland, the Carolwood Pacific Railroad demonstrates its founder’s passion and ambition, as well as his ever-present desire to expand upon his dreams, turning them into something even bigger and better.