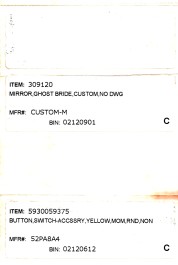 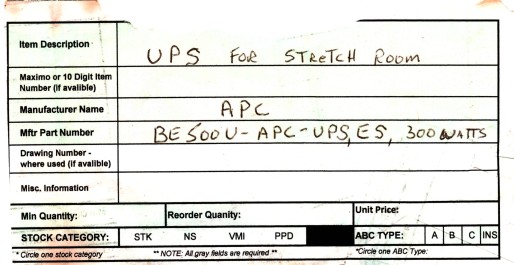 These parts labels and order form document the upkeep of the many Imagineer-designed effects housed with one of Disney’s most popular attractions, the Haunted Mansion.

The idea for the iconic attraction came about years before Disneyland’s opening, when Walt Disney called upon artist Harper Goff to create some of the earliest concept designs for his ambitious theme-park project. Though it didn’t make the cut as an opening-day attraction, development on the project continued as artists Ken Anderson and Sam McKim joined Goff in helping determine the look and style of the Mansion. Further along in the process, the conceptual artwork of Marc Davis and Claude Coats became instrumental in the attraction’s design. Rolly Crump, who envisioned a companion attraction called the “Museum of the Weird,” which never came to fruition, but lent several design elements to the finished Mansion, contributed greatly to the project, as well. He and Yale Gracey were chiefly responsible for creating the attraction’s many visual effects. X. Atencio helped solidify a storyline and penned, along with composer Buddy Baker, the now-famous “Grim Grinning Ghosts” theme. The façade of the Mansion was constructed along with the park’s New Orlean’s Square expansion, which opened in the summer of 1966, though the attraction itself wouldn’t be up and running for another three years. Initially conceived as a walk-through, plans were altered during this time to incorporate the recently-developed Omnimover vehicle system. Finally, almost two decades after talks first began of a haunted-house-style attraction, a midnight press event extending into the wee hours of August 12, 1969, revealed the spooky, plantation-style Haunted Mansion in all its ghostly glory. A couple years later, a second mansion—a variant Gothic-revival structure—debuted at the grand opening of Walt Disney World’s Magic Kingdom on October 1, 1971.

These parts labels were received in the spring of 2012 by Imagineers and maintenance technicians in an order shipment from Siemens Industries to the Florida-based Haunted Mansion attraction. As indicated on the labels, the order included mirrors used in the “Ghost Bride” projection-mapping effect in the attraction’s Attic Scene, as well as an industrial push-button switch, used in the attraction’s electrical operations. Also included is a parts re-order form, filled out in the hand of a Mansion technician, for an Uninterruptible Power Supply (UPS) to be used with the computer systems controlling the famed Stretch Room effects.

This rare documentation of the Haunted Mansion’s inner-workings provides a glimpse of the ever-evolving Imagineered technology that powers one of the most iconic theme-park attractions of all time—birthed as a simple idea and a few rough sketches all those years ago at the Walt Disney Studios.