The unorthodox nature of Fantasia—as well as its high production costs—represented a bold gamble by Walt Disney, who was veering away from the tried and true format of his first two wildly successful features, Snow White and the Seven Dwarfs and Pinocchio. When released, it was a hit with critics, tickets selling very well for the limited roadshow engagement. The film, however, did not do as well with general audiences. Disney, who at the time was feeling the financial strain of World War II, even allowed distributor RKO to cut nearly half the original feature, in order to make it more appealing to the average movie-goer. In fact, it wasn’t until the late 60s, nearly three decades after its release, that Fantasia would see any actual gains against its $2.28 million-dollar budget. Subsequent re-releases over the years and even a remake (Fantasia 2000), coupled with the film’s continued presence in Disney theme parks worldwide, have helped solidify the film’s success, and today it is often included in lists of the greatest animated films ever made. 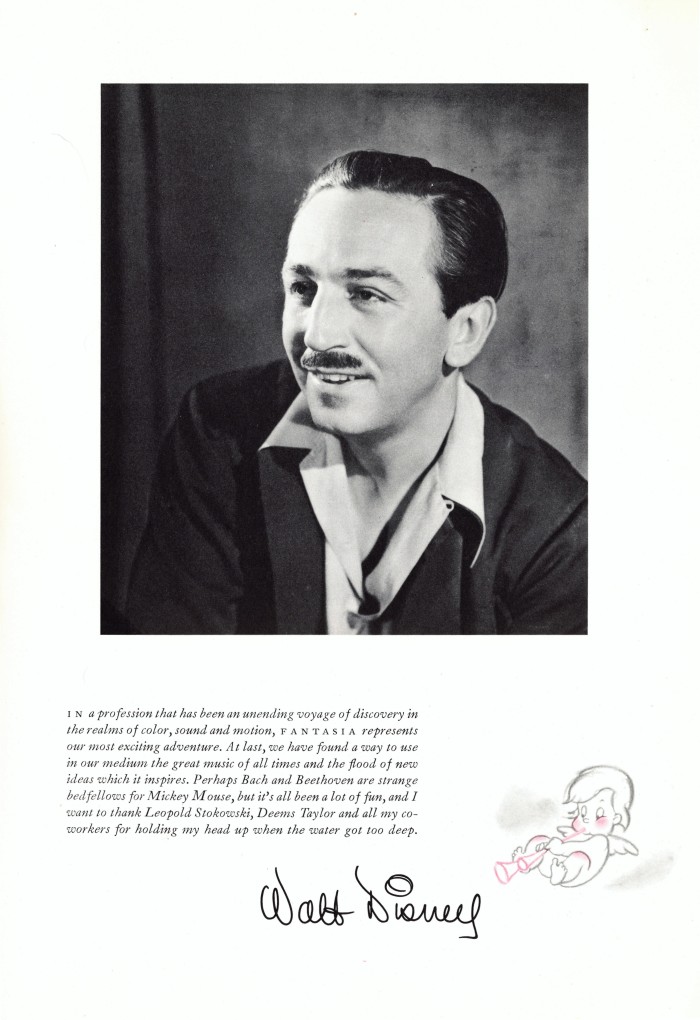 The Walt Disney Studios (in collaboration with RCA) even went so far as to engineer a brand-new stereo surround sound system called Fantasound, for which theaters in the above cities were outfitted ahead of the film’s release, in order to deliver an experience more akin to a trip to the symphony, rather than the movies. The program has the following to say about the pioneering system:

Fantasound is a revolutionary achievement in sound reproduction. Its development by RCA and the Disney Studio was a natural outgrowth of a desire to bring to motion picture audiences the dynamic range and true tone color of the symphony orchestra…freed from the mechanical limitations of ordinary methods of recording and reproducing.

In Fantasia, you will be able to experience the orchestra’s full richness of tone and subtlety of phrasing just as though you were hearing an actual concert in the Philadelphia Academy of Music or in Carnegie Hall.

The performance of the Philadelphia Orchestra, under Stokowski, was simultaneously recorded by nine sound cameras. One camera concentrated on the overall blend and the other eight obtained “close-ups” of the individual instrumental choirs. By the separation of the orchestral components, fullest advantage may be taken of the dramatic possibility of the musical compositions.

“Fantasound” points the way toward new develpments in the future of entertainment and its use in Fantasia is only the beginning.

Consistent with efforts to deliver a concert-like experience, Disney employees were positioned at theaters for the duration of the film’s run (which lasted a whopping fifty-seven weeks at New York City’s Broadway Theater) to oversee signage, stage presentation, lighting, and even usher duties. The film was shown twice daily and tickets could be reserved in advance, with each purchase including a copy of the souvenir program. Just as the actual animated film is formatted, patrons were given an intermission between the Stravinsky and Beethoven segments. The program features sections devoted to each of the composers and their corresponding musical segments:

Dance of the Hours – Amilcare Ponchielli

Also included are many behind-the-scenes photos from the film’s production, as well as both sketches and full-color artwork from the animated portions of the film (live-action sequences were centered around introductions and commentary by music critic Deems Taylor, as well as performance shots of the Philadelphia Orchestra, as directed by maestro Leopold Stokowski).