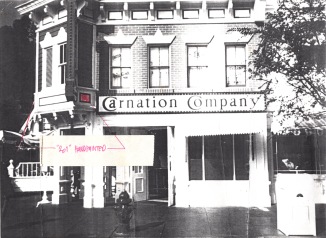 These three documents, dated December, 4, 1996, were created and used by Walt Disney Imagineering in the 1996-97 construction project of the “400 Block” of Main Street, U.S.A., Disneyland. Most significantly, the project would see the replacement of the long-standing Carnation Ice Cream Parlor with the relocated Blue Ribbon Bakery.

The Carnation Ice Cream Parlor and Restaurant first opened its doors to customers at the Disneyland Press Preview on July 17, 1955, where hungry park-goers would have found a range of soups, salads, and sandwiches to meet their needs, as well as, of course, a full menu of dessert options. In those early days, an old-fashioned ice-cream sundae or milkshake cost guests $.35; a hamburger was a dime more. Over the years, sitting on one of the tall stools at the soda-fountain-style counter became a tradition for many Disneyland visitors. In 1977, the shop’s popularity grew to the point that an outdoor seating area was added to fill the whole of West Center Street. In the mid-80s, sweets-magnate Nestlé acquired the Carnation Company and phased out the brand, allowing Disneyland, however, to continue use of the name.

The ’97 construction project, with on-site renovations beginning in January, moved the neighboring Blue Ribbon Bakery to occupy the Carnation Ice Cream Parlor, while all Carnation business was relegated to the outdoor seating area, which adopted the new name, Carnation Café. Meanwhile, the Blue Ribbon Bakery’s former location became home to the Gibson Girl Ice Cream Parlor (also sponsored by Nestlé). By March, all three “new” tenants were open for business.

A cast-member publication printed at the time included the following Imagineer-created backstories of the new businesses, as well as the dissolution of the Carnation brand:

In the late 1800s, a talented baker and his wife left their small European town to pursue a new life in America. In no time, his tasty treats became well-known throughout the town, and his friends convinced him to enter the 1901 State Fair. He was awarded first prize—a blue ribbon—in three of the four categories (the judge’s mother-in-law won first place in the fourth category). He also won enough prize money to realize his lifelong dream—his own bakery: The Blue Ribbon Bakery.

As the Blue Ribbon grew in popularity, the enterprising baker added another European tradition to his shop—a small European-style café, with comfortable tables and chairs. The name for the café was provided by his wife whose love for the sweet fragrant carnations was legendary: To help create a pleasant European atmosphere, she planted carnations in the window boxes surrounding the outdoor dining area.

Over the next fifteen years, not much would change. In 2012, however, after twenty-two years in two different locations, the Blue Ribbon Bakery (yet another Nestlé sponsorship) would close its doors to make way for the Jolly Holiday Bakery Café, located in the park’s Plaza Pavilion. As a result, the Carnation Café would resume its former glory, filling its original space and once again offering both indoor and outdoor seating.

These three documents, dealing specifically with a very historic and much-loved section of Main Street, outline the address-number location plan as impacted by the changes, and feature original handwritten annotations, sketches, and paint samples. They offer fascinating documentation of the evolution of one of Walt’s own opening-day features, as well as a rare glimpse of the doers behind those magical Disney dreams.