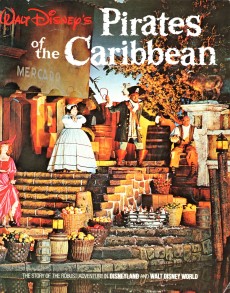 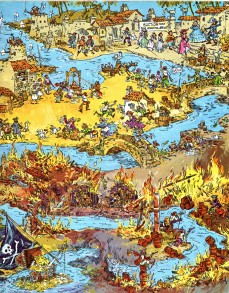 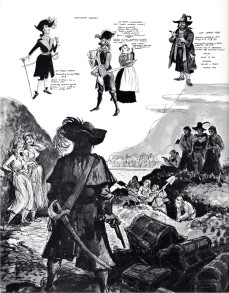 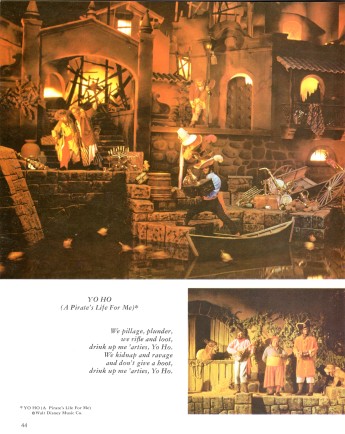 This souvenir booklet, entitled Walt Disney’s Pirates of the Caribbean, and published by Walt Disney Productions in 1974, was sold in both Disneyland and Walt Disney World to promote the attraction of the same name. The 48-page text contains not only the story of the attraction’s development and construction, but also a brief historical overview of piracy itself. Also included are many behind-the-scenes pictures of the Disney Imagineers at work, as well as a great deal of concept artwork by Disney artists, most notably that of Marc Davis, a lead designer on the attraction. Famed Disney cartographer Sam McKim’s popular attraction ride-through map can also be seen on the inside front and back covers. Of special note is the inscription and signature of Imagineer X. Atencio on page twenty-three of the book (2015). Atencio has signed below a picture of himself and composer George Bruns, as they compose and arrange the attraction’s now-famous theme song, “Yo Ho (A Pirate’s Life for Me).”

The tune was actually Atencio’s first attempt at songwriting, having been hired at the studio in 1938 as an animator. A product of LA’s Chouinard Art Institute, he worked on the feature Fantasia, as well as many short films, including the Oscar-winning Toot, Whistle, Plunk and Boom and the Oscar-nominated Noah’s Ark. He also worked on the animation sequences of live-action films, such as The Shaggy Dog, The Parent Trap, Babes in Toyland, and Mary Poppins. In 1965, Atencio relocated to WED Enterprises to assist in the implementation of the Primeval World diorama, which had been featured in the Ford Magic Skyway attraction at the 1964-65 New York World’s Fair, into the Disneyland Railroad circuit. Shortly after, he was tapped by Walt to write the lyrics for the new Pirates attraction that had been in development for several years, something Atencio had never done before. His foray into the music world was met with great success, and he would go on to write the themes for Haunted Mansion (“Grim Grinning Ghosts”), Country Bear Jamboree (“Bear Band Serenade”), and If You Had Wings (“If You Had Wings”), the now-defunct Eastern Air Lines-sponsored attraction at Walt Disney World. He also worked as a scriptwriter on Adventures Thru Inner Space, as well as Pirates of the Caribbean and the Haunted Mansion. He contributed to several pavilions for Epcot Center in the early 80s, and assisted with the installation of Haunted Mansion at Tokyo Disney. He retired in 1984, after a nearly fifty-year career with the studio, and was honored with the Disney Legend Award in 1996.

This souvenir booklet provides an amazing collection of photos, artwork, and text which document the rise of what some consider the greatest attraction in theme-park history—an acknowledgment which could have never come about, were it not for the fortuitous circumstances that rendered X. Atencio’s unforgettable hit soundtrack.