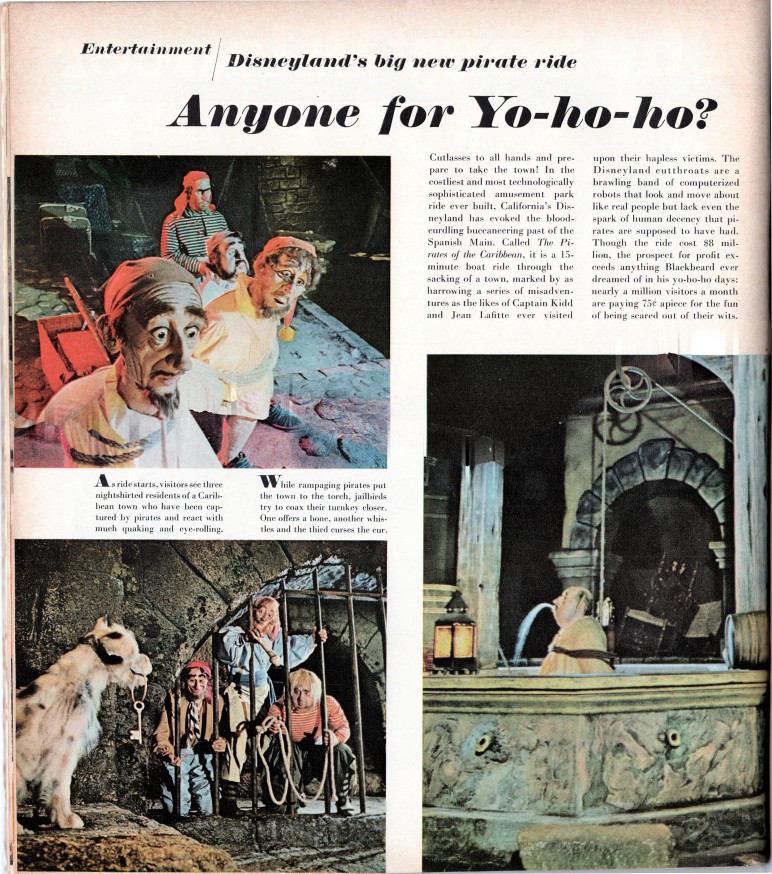 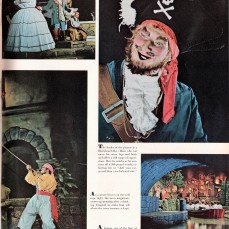 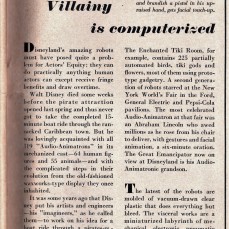 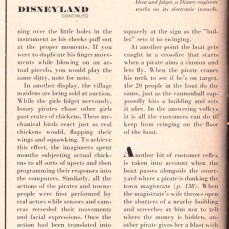 This article—entitled “Disneyland’s big new pirate ride: Anyone for Yo-ho-ho?”—appeared in the September 15, 1967, issue of LIFE Magazine, describing with both text and pictures the park’s latest E-Ticket attraction, Pirates of the Caribbean.

The story appeared just shy of the attraction’s six-month anniversary of its Disneyland opening and tells of the swashbuckling adventures to be had on the Imagineered Spanish Main, noting that “nearly a million visitors a month are paying $.75 apiece for the fun of being scared out of their wits.” Included are seven color images of some of the ride’s most famous scenes and Audio-Animatronics, as well as two black and white behind-the-scenes photos of Disney Imagineers at work.

The attraction, which premiered on March 18, 1967, was the final that Walt Disney personally oversaw. Originally designed as a walk-through wax-museum-style attraction, the success of the It’s a Small World attraction, which debuted at the 1964-65 New York World’s Fair, inspired the conversion to water. Likewise, the progressing technology used in the fair’s Great Moments with Mr. Lincoln and Carousel of Progress shows, helped spur the switch to Audio-Animatronics. Notable Imagineers who assisted in the development and design of the attraction include Marc and Alice Davis, Claude Coats, X. Atencio, Blaine Gibson, and Yale Gracey. Unfortunately, Walt passed away a few months prior to its completion. In a 1992 interview, however, X. Atencio (who also penned the lyrics to the ride’s famous theme song) recalled that Walt had been able to “ride” a portion of the attraction while still in development, thanks to several of his most trusted Imagineers wheeling him on a dolly through an elaborate mock-up of the iconic auction scene, complete with set and players.

This original 1967 article marks the opening and early success of one of the most beloved attractions in theme-park history, as well as the end of Walt Disney’s direct involvement in his beloved Disneyland.