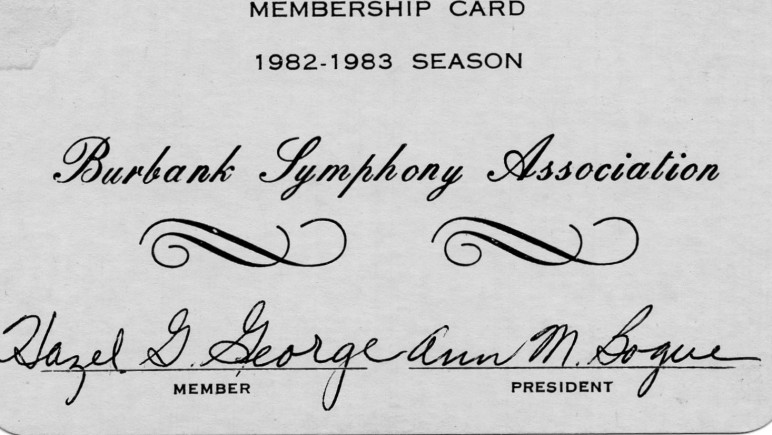 This membership card to the Burbank Symphony Association’s 1982-83 season belonged to Walt Disney Studio employee Hazel George, known to be one of Walt’s closest friends and advisors.

George acted as the studio nurse, but more significantly also served the role of Disney’s personal nurse. She treated Walt as a patient from the early 1940s with his lingering polo injury, all the way up to a few days before his death in 1966, and is considered by many to have been one of Walt’s most trusted confidantes. In fact, the last time Walt ever left the studio, just a few weeks before his death, the two met privately and wept openly as they exchanged their final goodbyes.

In addition to their nearly daily physical therapy sessions (especially as Walt grew older) in the private room that Walt had dubbed his “Laughing Place,” Hazel George worked as a songwriter for the studio (under the pseudonym Gil George), co-writing approximately a hundred songs for a variety of Disney film and television projects, including those used in the Disneyland television series, Zorro, and the Mickey Mouse Club, as well as the features The Light in the Forest, Tonka, Westward Ho the Wagons, and the memorable theme from Old Yeller.

Through their close relationship, she also encouraged Walt to attend the Chicago Railroad Fair with Ward Kimball, a trip that would ultimately contribute to the earliest concepts of Disneyland. She then helped spread the word and even raise money for the park in its conceptual phase, and is said to have convinced Roy Disney to “buy in” to his brother’s idea for a theme park.

Music lover that she was, George would be a member of the Burbank Symphony Association for many years, living in the city until her death in 1996. Coincidentally, during a 1955 performance by the Burbank Symphony, which Walt attended, the studio head discovered future Mouseketeer and Disney film star Annette Funicello, performing the lead role in “Swan Lake.”

This rare personal item, belonging to the woman who perhaps knew Walt Disney better than any of his thousands of colleagues over the years represents a unique intersection of many different aspects of the Disney story: from their twenty-five-plus year relationship and the significant role she would play in his life, to the discovery of one of the studio’s most iconic stars, who would headline the television show which facilitated much of George’s own impressive music career.