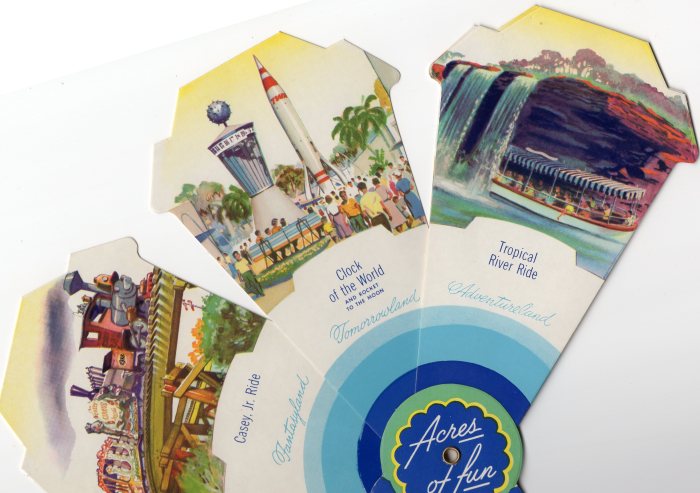 This Disneyland “Acres of Fun” Souvenir Fan from the park’s opening year features artwork from ten classic attractions and includes its original souvenir mailing envelope. The fan unfolds to reveal colorful scenes of Sleeping Beauty Castle, Chicken of the Sea Pirate Ship, and Canal Boat Ride from Fantasyland; The Mark Twain River Boat Ride from Frontierland; and Astrojet Fly-It-Yourself from Tomorrowland on one side, with Skyway Ride, Clock of the World and Rocket to the Moon from Tomorrowland; The Stage Coach Ride from Frontierland; Casey, Jr. Ride from Fantasyland; and Tropical River Ride from Adventureland on the other. (The names of several of the attractions would be revised shortly after the park’s opening.)

NOTE: In 2009, D23—the official Disney fan club—released a reproduction of the fan made exclusively for members by the Walt Disney Archives Collection, the packaging reading, “Capturing a simpler time, these paper fans featured original artwork depicting attractions from [the] Park’s inaugural year.”