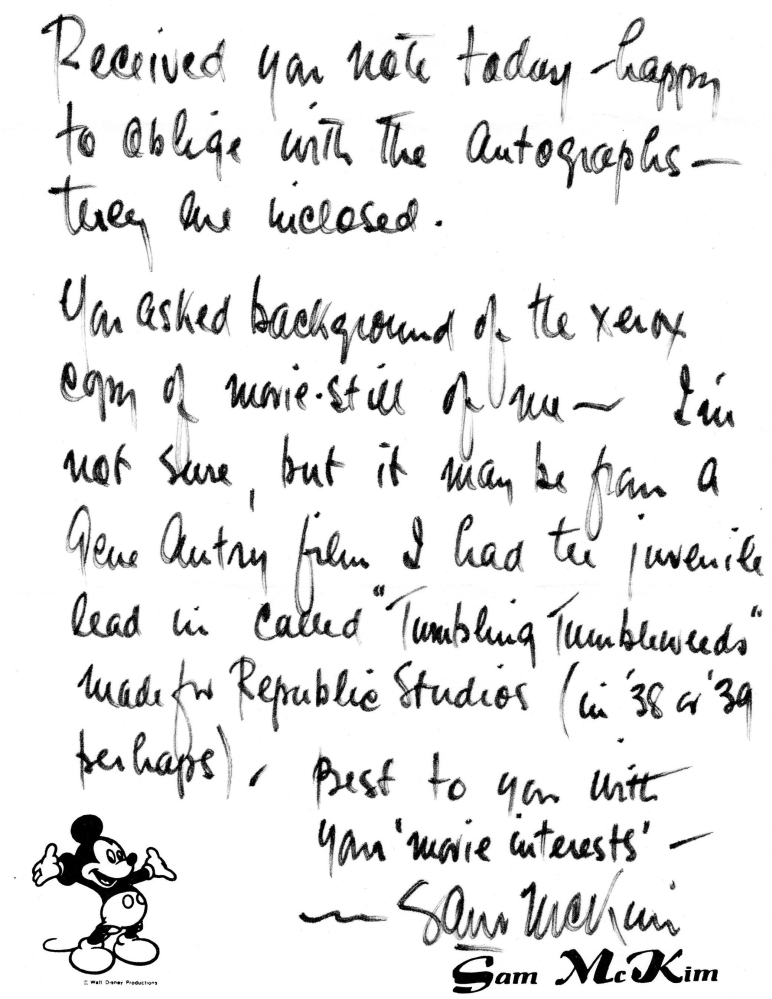 This handwritten reply to a fan mail autograph request from April 1981 features Disney Legend Sam McKim’s signature on his own personal Walt Disney Productions stationery. The letter mentions the enclosure of additional autographs, as well as a response to a question about McKim’s former acting career.

Received your note today – happy to oblige with the autographs – they are inclosed [sic].

You asked background of the Xerox copy of movie-still of me – I’m not sure, but it may be from a Gene Autry film I had the juvenile lead in called “Tumbling Tumbleweeds” made for Republic Studios (in ’38 or ’39 perhaps).

Best to you with your ‘movie interests’ –

Sam McKim (1924-2004) began motion picture work at the age of ten, and was soon signed to a contract with Republic Studios in Los Angeles, with whom he made numerous westerns and B-movies. The film referred to in the letter, Rovin’ Tumbleweeds (Republic Pictures, 1939), in which “Sammy” McKim acted alongside Gene Autry, the famed “Singing Cowboy,” is one such example of the genre within which most of the young actor’s work fell (McKim mistakenly cites the film as Tumbling Tumbleweeds in the letter). Over the course of his brief film career, he also had the opportunity to work with such Hollywood legends as John Wayne, Spencer Tracy, and Rita Hayworth.

McKim began work at the Disney Studios a year prior to the opening of Disneyland in 1954, providing inspirational sketches key to the development of the park. He ended up working on various design elements in every land of the park, and went on to contribute to such classic attractions as Pirates of the Caribbean and Haunted Mansion, along with 1964-65 World’s Fair attractions, Great Moments with Mr. Lincoln and Carousel of Progress. He also provided artwork throughout the development of Walt Disney World’s Magic Kingdom, Epcot Center, and Disney-MGM Studios. He occasionally lent his talents as a storyboard artist for various film and television projects at the studio, as well.

He is perhaps best known, however, for his series of Disneyland souvenir maps released between 1958-1964. McKim’s beautiful renderings of the park’s landscape and keen attention to detail make the maps highly desirable among Disney collectors. He also created a commemorative map for the opening of Disneyland Paris in 1992. Four years later, he was inducted as a Disney Legend. He passed away in 2004, at the age of 79.

The contents of this unique letter, written and signed in McKim’s hand, represent a unique memento from one of the studio’s most recognizable names, while spanning nearly the entire breadth of his memorable career—from child actor to esteemed artist and official cartographer of the “Happiest Place on Earth.”