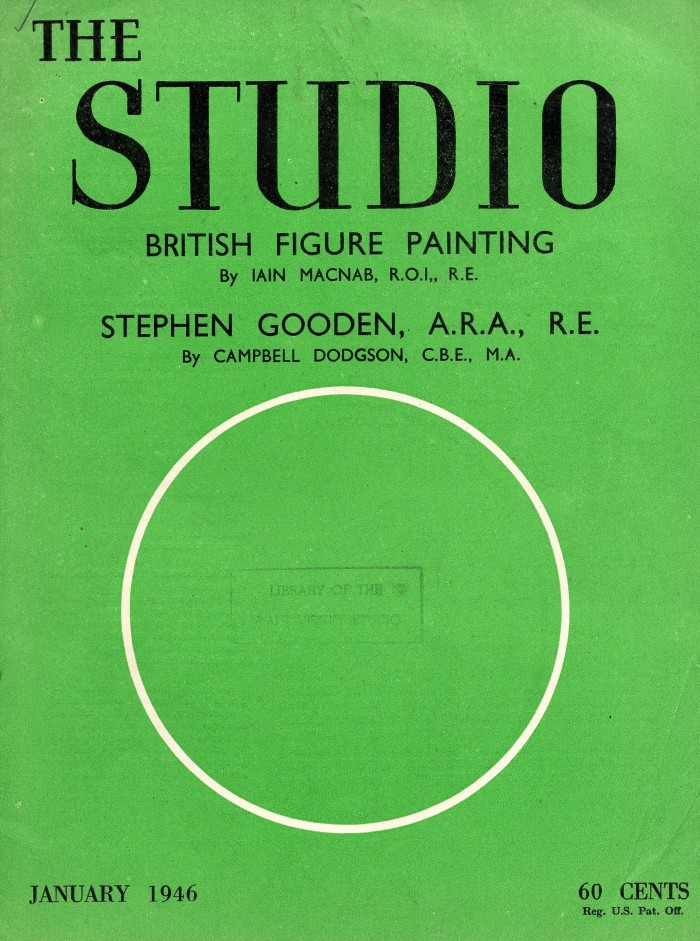 As denoted by the ink-stamp on the front cover, this is the Walt Disney Studio Library’s copy of the January 1946 issue of The Studio (“An Illustrated Magazine of Fine and Applied Art.”) The issue includes the original library checkout card, featuring signatures of those Disney animators who read and referenced the magazine over a nearly eight-year period.

Animators include Charles Payzant (1898-1980), an artist specializing in watercolors who worked on both shorts and feature films. He was known for the memorable backgrounds he created for such classics as Snow White and the Seven Dwarfs, Pinocchio, Fantasia, Dumbo, Bambi, The Three Caballeros, and Make Mine Music.

Also listed is T. Hee (1911-1988), who famously designed and choreographed “The Dance of the Hours” sequence in Fantasia, as well as wrote and directed segments of Pinocchio. He also worked on the live-action film, The Reluctant Dragon, and contributed substantially to the well-known Disney short, “Mother Goose Goes to Hollywood.” His stop-motion animation work on the short “Noah’s Ark” (Disney’s first use of the technique) was nominated for an Academy Award. He, along with Bill Justice and X. Atencio, were also responsible for the stop-motion animation sequences in such live-action films as The Parent Trap and Mary Poppins. Later in his career, he joined the ranks of the Disney Imagineers, working on various projects for both Disneyland and Walt Disney World, including the design of the figures featured in Rolly Crump’s clock facade for the It’s a Small World attraction. Hee also co-founded and taught within the Character Animation program at the California Institute of the Arts, as well as serving as chair of the Film Arts Department.

Another notable name on the card is Hank Porter (1900-1951), an artist who worked in the Disney Publicity Art Department for a decade-and-a-half and was responsible for the “Silly Symphony” comic series and Sunday-comic adaptations of both Snow White and the Seven Dwarfs and Pinocchio. He also created countless illustrations for various publicity and promotional materials (including the majority of Disney’s WWII insignia artwork), as well as such publications as Mickey Mouse Magazine and Dell’s Walt Disney Comics and Stories. He is also somewhat infamous for dashing the hopes and dreams of many Walt Disney autograph collectors, being one of only a select few animators to be authorized by Disney himself to sign the studio head’s signature on artwork, promotional materials, and fan mail. While those familiar with the evolution and subtleties of Disney’s signature can distinguish fairly easily between the two, it is Porter’s version of the Disney signature—rather than Disney’s own—that is more so responsible for establishing the generally-accepted look and style of the iconic and highly-recognizable “Disney-script.”

Walt Stanchfield (1919-2000) is another well-known animator on the list who worked on every Disney animated feature from 1949’s The Adventures of Ichabod and Mr. Toad to 1986’s The Great Mouse Detective, and even continued to serve as a consultant on later films, such as Oliver and Co. and Who Framed Roger Rabbit (being cited as the man responsible for putting the “wiggle in Jessica Rabbit’s walk.”) In the 1970s, he established and headed-up a studio animation training program to teach and mentor the next generation of great Disney artists (the likes of John Lasseter, Brad Bird, John Musker, Ron Clements, Mark Henn, and Glen Keane). Many distinguished animators credit Stanchfield as a major influence, and following his death, over eight hundred pages of his lecture notes were compiled and published as a comprehensive “master class” on the art of animation.

This reference magazine, straight from the studio’s library, represents a unique contributing resource to the Golden Age of Disney Animation and offers a historical who’s who of the legendary artists to thumb through its pages.